If your current dishwasher isn’t performing well and you’d like to replace it. So you’ll have to uninstall the previous dishwasher, but how do you do that? This is a question that has arisen in your head.

So be patient because we’ll show you how to remove a dishwasher in no time. A dishwasher is a unit that cleans all the soiled dishes quickly using a perfect combination of detergent and hot water.

Follow the instructions below to remove the dishwasher, which is critical to maintaining the space connection for the new dishwasher. Let’s take a look at the sum of a superb dishwasher removal method.

Table of Contents hide
HOW TO REMOVE THE BUILT-IN DISHWASHER?
IMPORTANT STEPS TO REMOVE DISHWASHER
STEP BY STEP GUIDE TO REMOVE OLD DISHWASHER
1. REMOVE FROM THE COUNTERTOP
2. THE PANEL MUST BE REMOVED
3. DISPOSAL
4. REMOVE HOSE
FAQs
1. WHAT MATERIALS AND TOOLS ARE REQUIRED TO REMOVE THE DISHWASHER?
Share this post:
Related Posts:

HOW TO REMOVE THE BUILT-IN DISHWASHER? 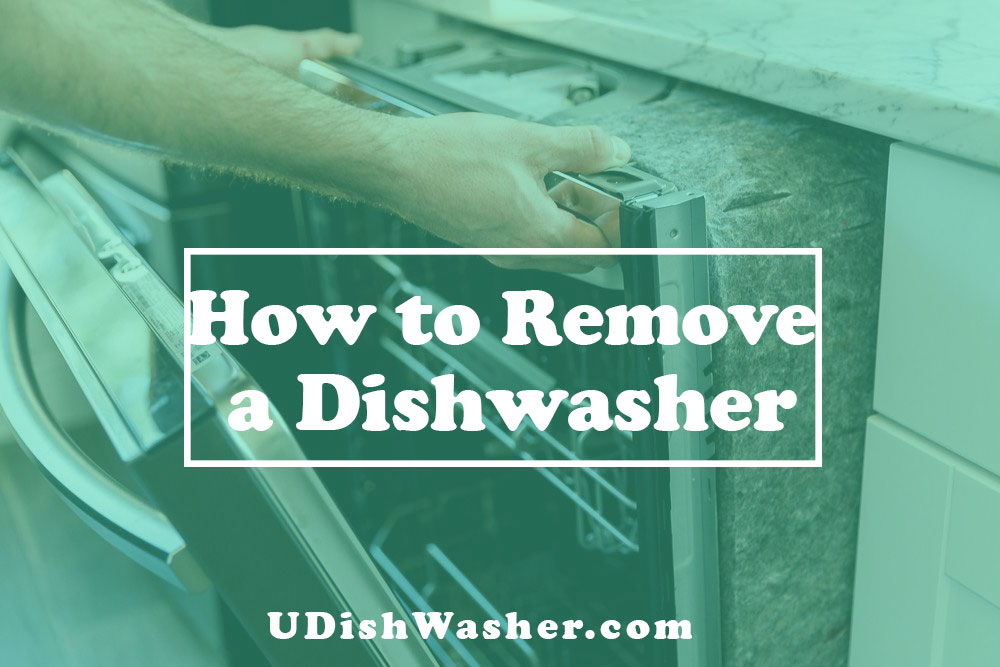 How do I take out the dishwasher? Are you thinking the same thing? Keep in mind that removing a dishwasher is a relatively simple procedure. There are a few steps that must be followed step by step

The first step is to clear out the cabinet where the dishwasher is kept. To replace your dishwasher, remove the items from the cupboard beneath your sink and reveal the water-closed valve.

This will allow you to easily remove the old dishwasher drain line and inspect the existing piping attachments for kinks or leaks.

Remove any connections with care. Check the power button before removing it. Before you do it at all, turn off the dishwasher’s electricity?

TURN OFF THE WATER

If the faucet is linked to the dishwasher valve, it will cause problems; therefore, disconnect the dishwasher’s water supply. Most dishwashers have a water

Why is it necessary to remove the dishwasher’s wiring? You can get an electric shock if the wiring is linked to the dishwasher. On the bottom front of most modern dishwashers,

there is a short “removable panel.” Clips or two small screws are usually used to hold this front panel in place. Carefully complete the step.

Remove the drain and water lines after the wiring has been removed. Remove any water that may have accumulated inside the old dishwasher. After that, disconnect the old dishwasher drain pipe from its connection

beneath your sink. After that, you’ll need to disconnect the water supply line. The water line is accessible on most dishwashers by removing the front panel’s bottom panel. Before starting, make sure you have a pan

or towel underneath to catch any water that may leak out when the faucet is turned off. When removing the drain line, use caution.

In last, you should be able to slide the dishwasher out of the space gently it filled once the electrical connectors, water supply, and drain lines have been removed; use a towel to keep it from tearing up your kitchen floor.

Dishwasher removal generates a lot of mess since water in the valve spills all over the floor. Also, Taking out a built-in dishwasher can result in some minor water spillage no matter how careful you are.

After the dishwasher has been moved, thoroughly clean the area with a clean, dry towel to eliminate any water from the floor or beneath the counters. Suppose you don’t want to use a towel that uses the old wool cloth to soak up all the water from the floor.

If you are still confused, keep the following steps in mind

1. REMOVE FROM THE COUNTERTOP

2. THE PANEL MUST BE REMOVED

which is fastened to the dishwasher with a few screws. Using a screwdriver, locate the screws and unscrew them from the frame. Remove the board and set the screws aside.

Place a voltage detector pen on the disposal’s wire if you’re not sure it’s disconnected. The wire is still hot if it lights up. While disconnecting the garbage disposal, stay active.

Once all of the dishwasher connections have been removed, remove the dishwasher’s hose. If you have a dishwasher, a one-inch pipe connects your disposal to it. A hose clamp is used to attach this hose.

Disconnect the hose from the disposal by loosening the hose clamp screw using a screwdriver. In the event of water drainage, could you place it in a bucket or towel?

1. WHAT MATERIALS AND TOOLS ARE REQUIRED TO REMOVE THE DISHWASHER?

There are the following accessories that you require to remove the old dishwasher.

If you follow all of the procedures carefully, removing a dishwasher is a straightforward task. It will be enjoyable to remove your old dishwasher

and replace it with a new one. The instructions listed above are for your convenience; follow them attentively and enjoy quick dishwashing.